One Step Forward; Two Steps Back 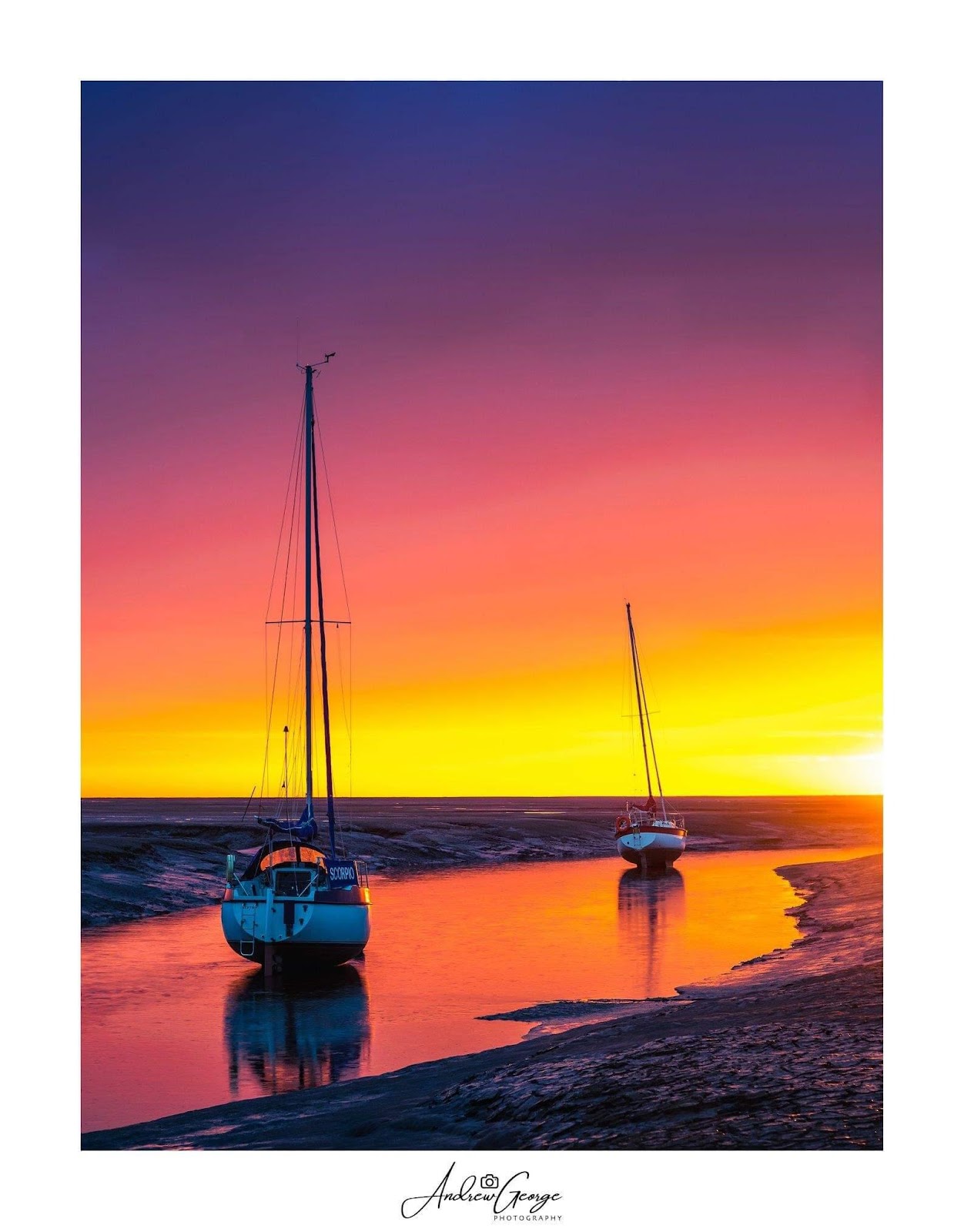 Unusually for me, I have a rare early finish from work during mid week. Normally I finish hours later with absolutely no chance of heading out with my camera.

This has now left me with a very tough decision to make.

Do I stay in to have an early night ready for work tomorrow or head out with my camera.

I may not get another chance for a

couple of weeks and find it almost impossible to turn down this opportunity.

With my mind made up, I check Google Maps on my phone where I have locations saved which I have been to or would like to visit so all I have to do now is to choose one that suits.

The place I had chosen to go was Blundellsands Sailing Club between Crosby and Formby, It has sea, sand and hopefully boats. I can also be there in less than 30 minutes which is perfect.

With the weather not looking promising for a decent sunset, I headed off in the car down the M57 motorway with my camera equipment and walking shoes; however in hindsight wellies would have been more favourable.

As I arrive at my destination, I find that the sailing club car park is closed but this is no problem as there is a public footpath near by that allows direct access to the beach.

I throw my bag on my shoulder and change into my walking shoes then head off down the gravel path towards the shoreline. The first thing I noticed was a mast from a sailing boat extending up above the tips of the sand dunes giving me some idea of what lay beyond. Now filled with excitement that there is at least one boat still out today, I climb up onto the ridge to give me a better view of the area. To my joy there was more than just one boat, there was many.

I have visited this location once before.

Last time I went south down the beach towards Crosby as there was no boats to be seen in the other direction. What I found was that the beach is littered with bricks and rubble which I can only imagine to have either been washed up by the tide or have been placed there as some sort of sea defence, but I’m not sure.

This was also the location where I sat next to a dead sea bird while capturing sunset without even realising until I started packing up my camera and tripod.

I couldn’t find much to photograph this way, but I did come away with a couple of keepers. The sunset was pretty good that night too. 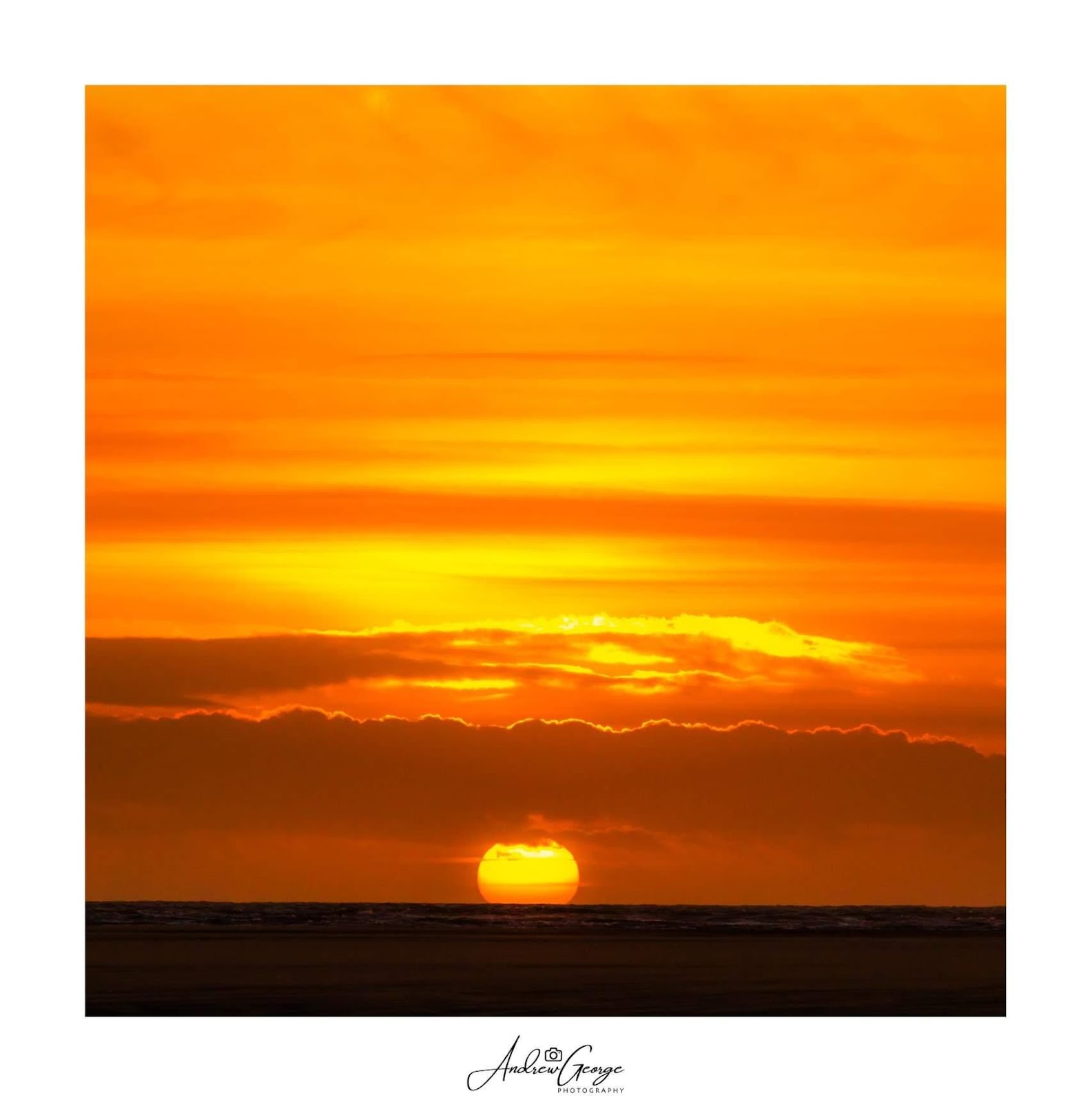 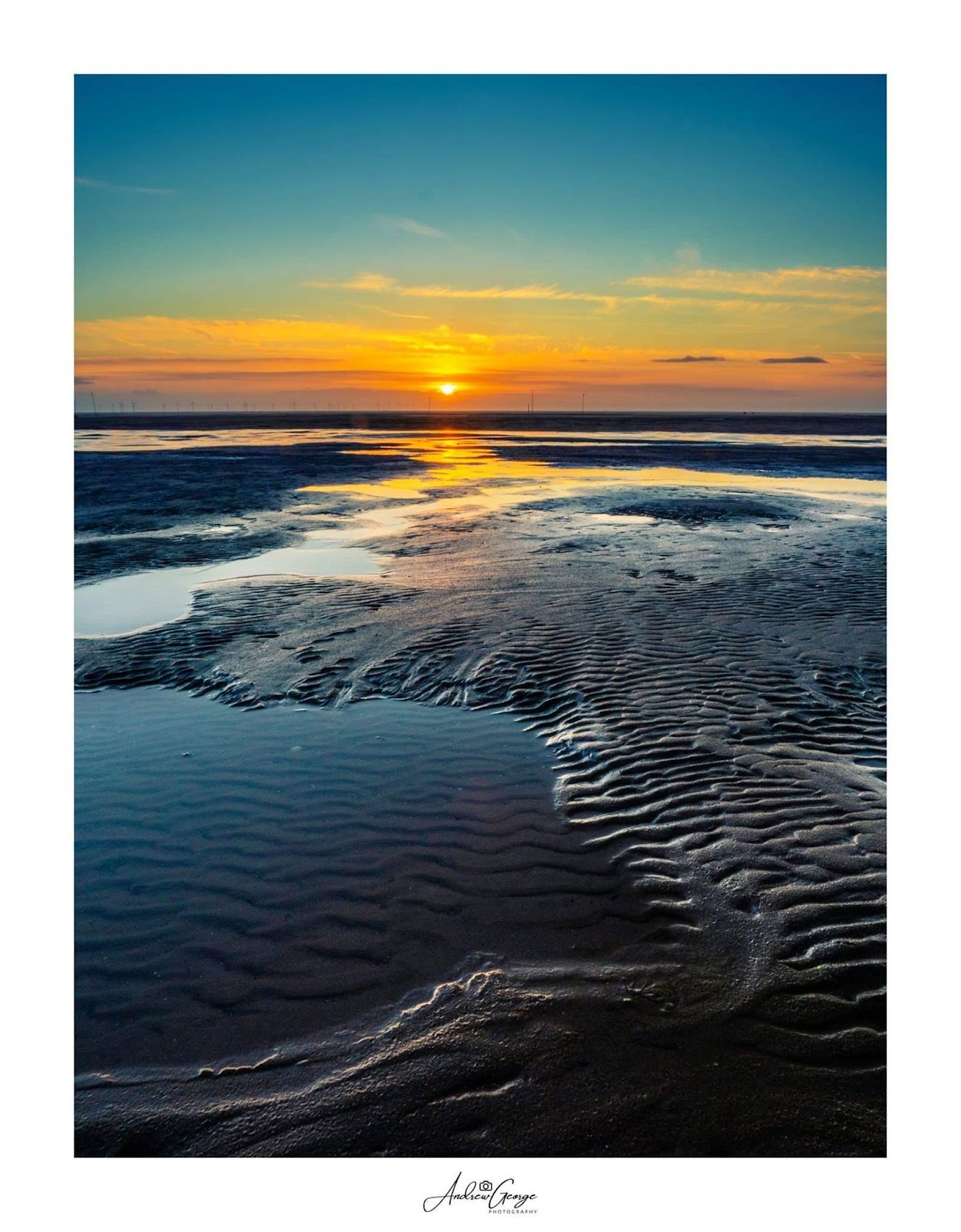 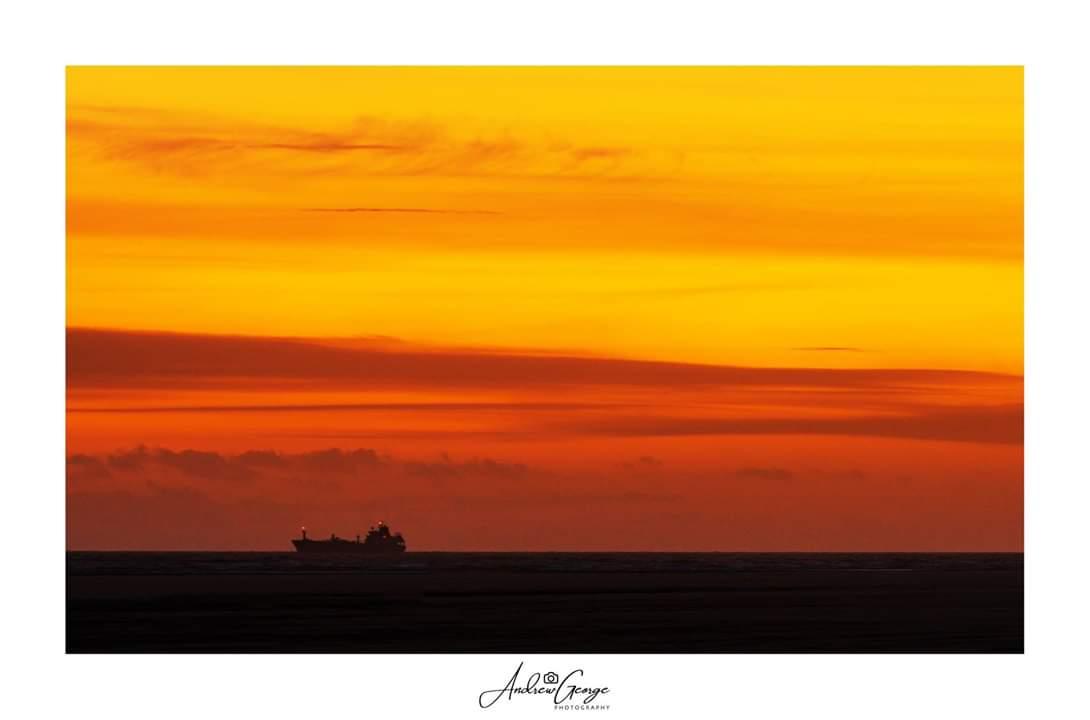 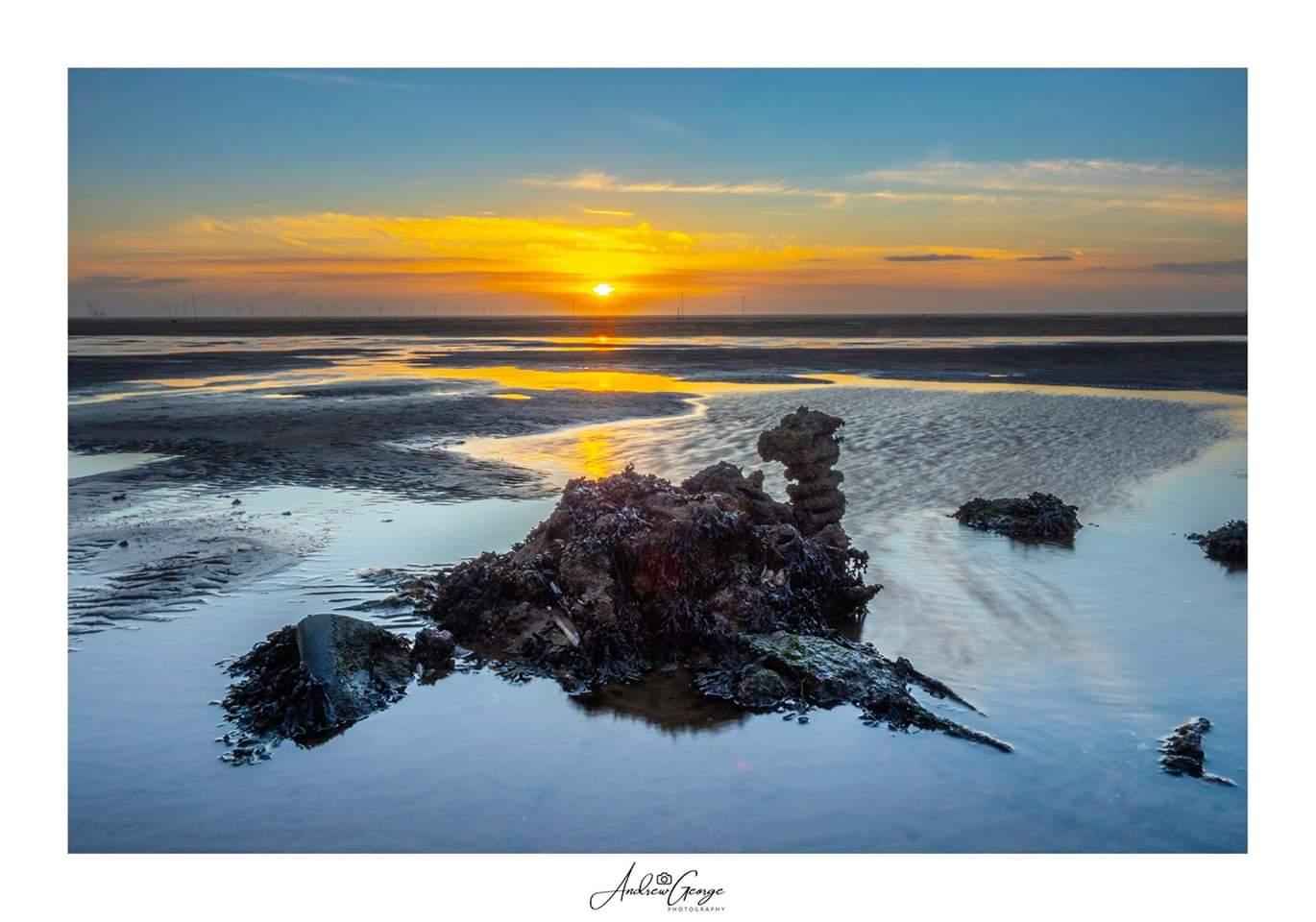 This time I headed north up beach towards Formby and my goal was to capture a picture of a boat with its reflection in the water.

I consciously made the decision to leave my camera in my bag and try to find a composition first before setting up my equipment. The idea behind this was that I would put a little bit more thought into my composition this time instead of taking multiple test shot while walking round and ending up with 300 images to edit through later.

The light was very flat, dull and the sky was grey with a hint of blue but this would have to do. I walk north for only about 5 minutes following the coast until I can go no further due to the way the estuary runs inland from here. Time to turn around and start taking some images.

I attached my camera to my tripod and set up to capture my first image. 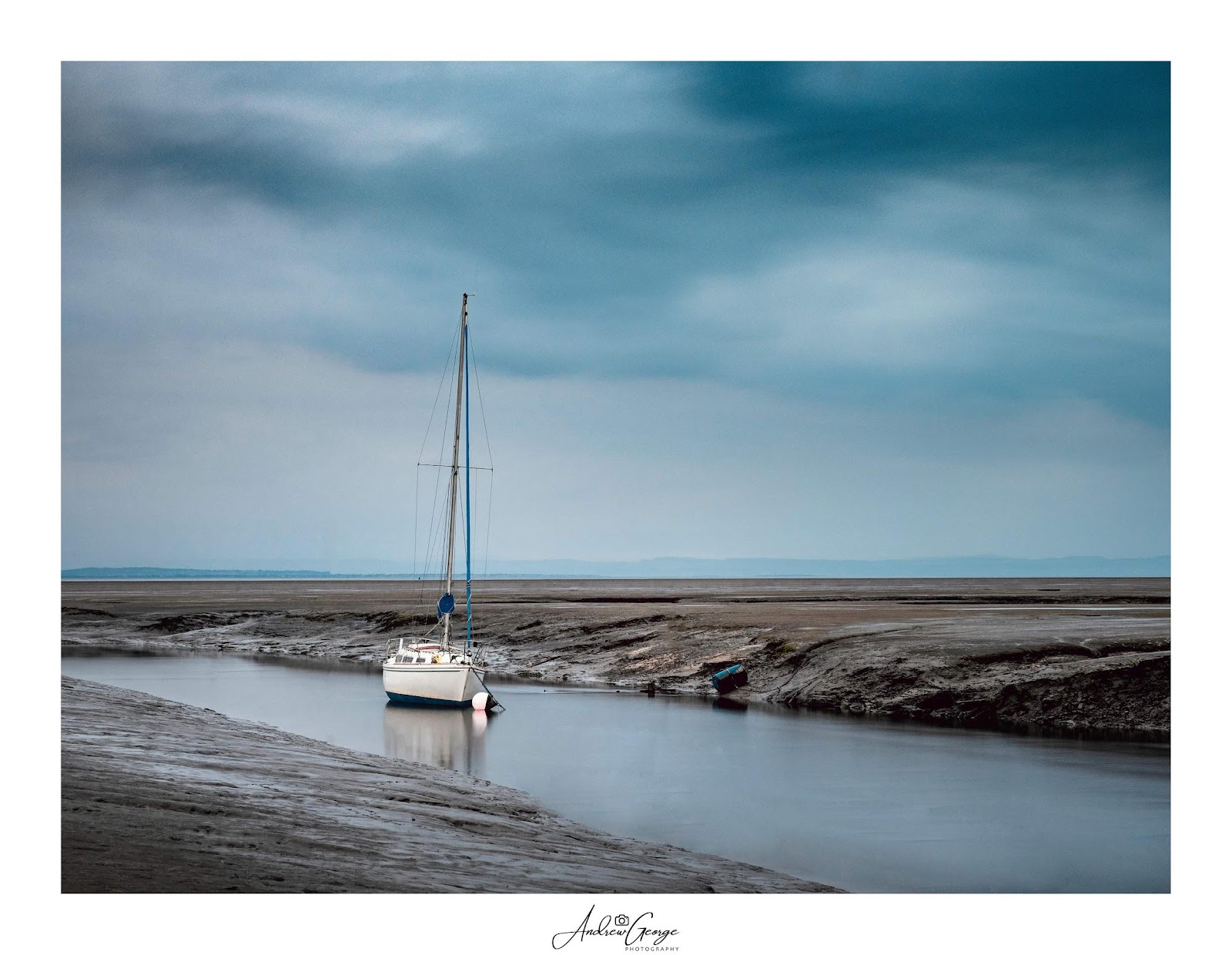 My subject was an anchored boat in the estuary which was just about floating. I tried to use the estuary as a leading line upto the boat which I had placed on the bottom left third of the image but looking at the back of the camera it hadn’t come out quite as I envisaged which I think was mainly due to the none flattering light. However, having completed a moody edit on the picture in lightroom, I quite like it now.

Onto the next one.

By the time I’d finished taking this image, an opening had started to appear between the clouds and the horizon. This looked promising. 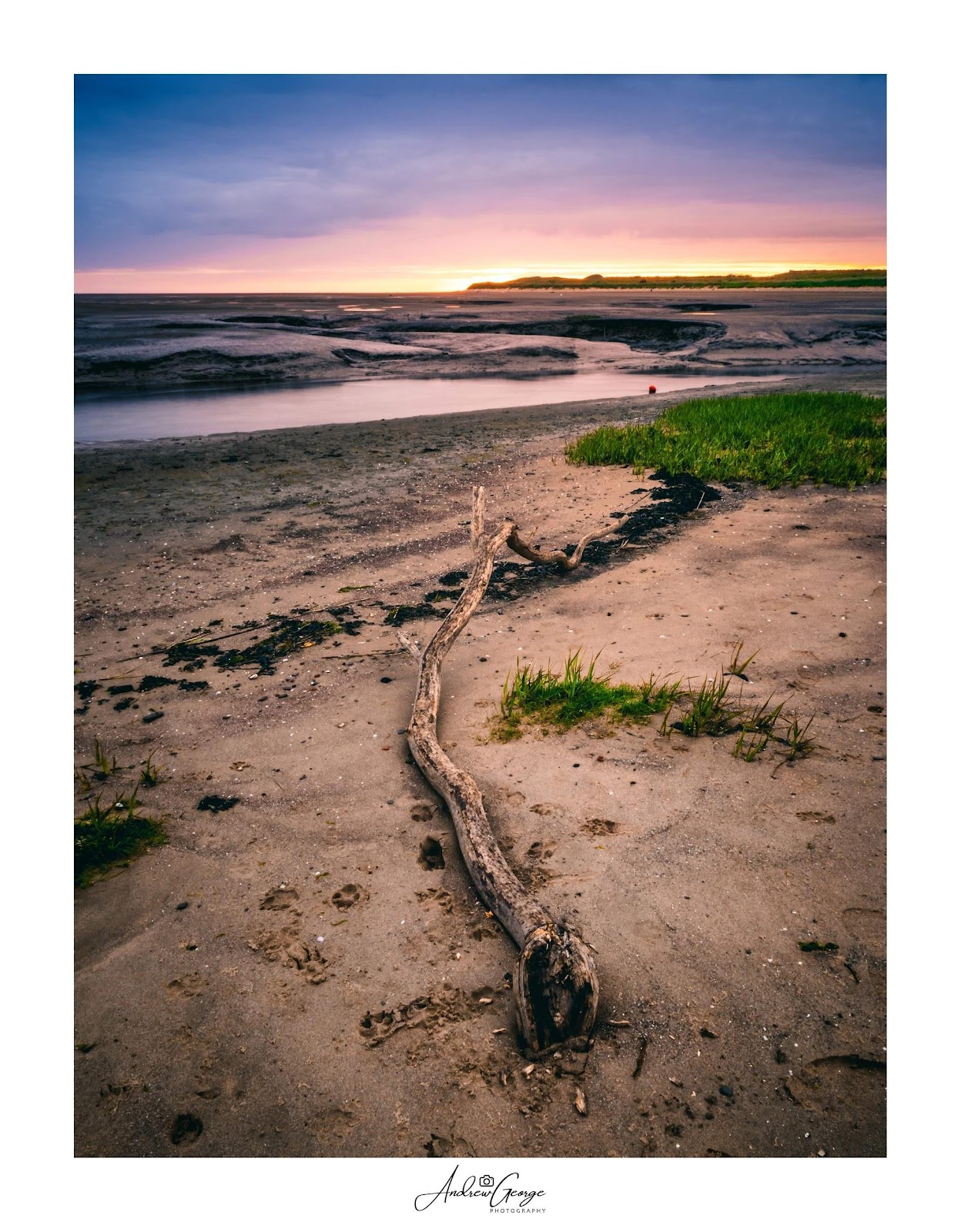 I had found a large tree branch lying on the sand pointing directly towards the sunset.

I used the timber to lead your eye towards the sunset and made sure to have the horizon on the top rule of thirds. I thought this image was ok but there is better to be had I was sure. 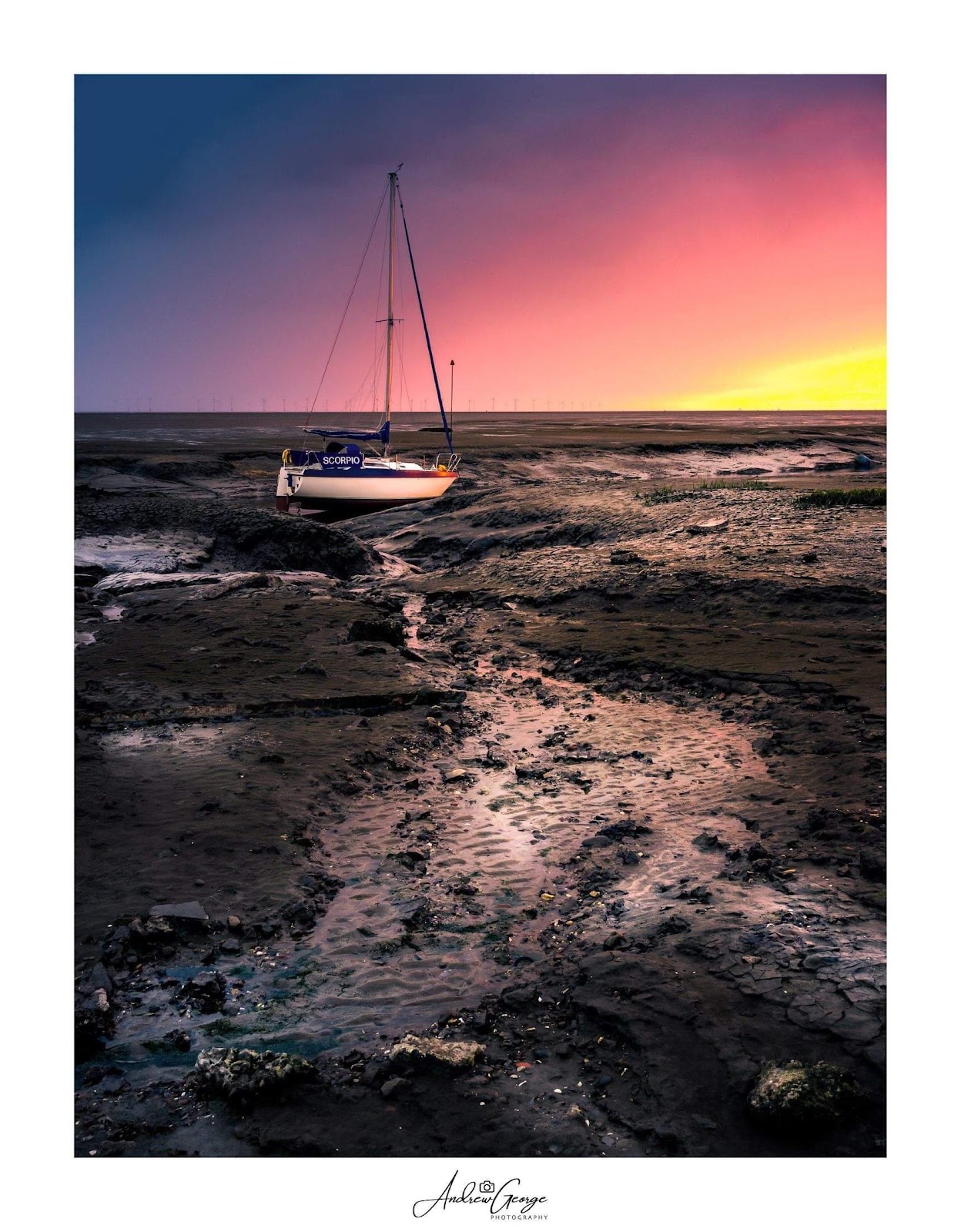 My final spot was pretty much back to where I entered the beach and this would have to be my final location as sunset was fast approaching. As I was walking back to this spot, the sun had began to appear through the thin opening of clouds on the horizon. Big, bright and round It lit up the beach giving a very strong and beautiful magenta colour cast to the whole scene. Wary of the fact this would not last long I quickly tried to set up my composition but there was a problem, the ground was too boggy and my feet where getting stuck in the wet clay like sand. After moving Backwards and forwards, side to side it’s clear that I will have to overcome this challenge to get my shot and maybe sacrifice another pair of shoes. 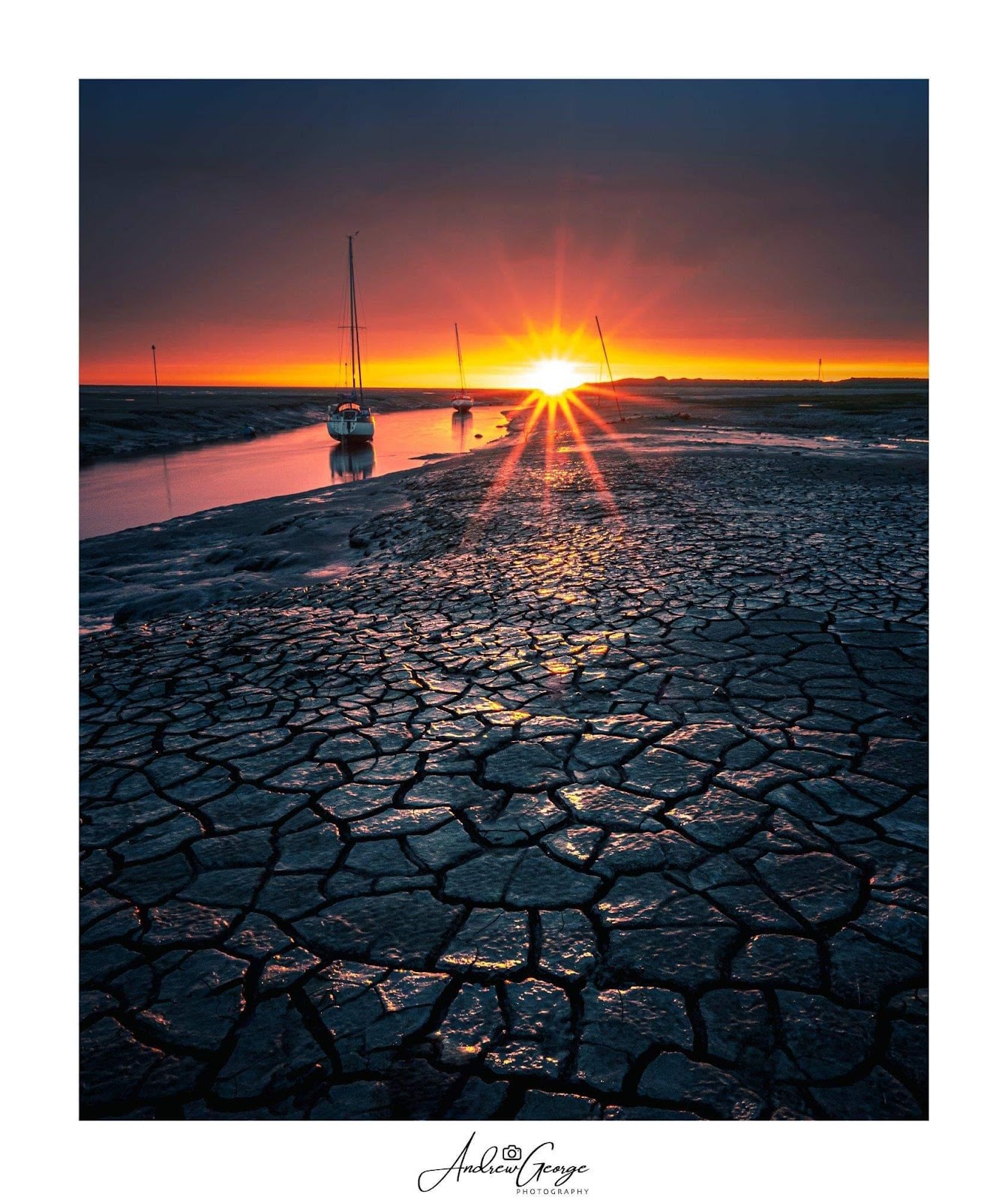 Finally got it! I’ve got a boat, my reflections and a stunning sunset.

I’ve packed up my gear and I start heading home but I see one more composition which I had forgotten about. It was looking directly into the sunset with estuary snaking through the image as my leading line with two boats reflecting on the calm sea water. It would have been preferable that the boats were facing the opposite way, bow pointing to the camera but nevertheless I thought to myself, `I can’t leave with taking this picture’. I unpacked all my gear again, tripod, lens, polarising filter just so I was not leaving this image behind so to speak. 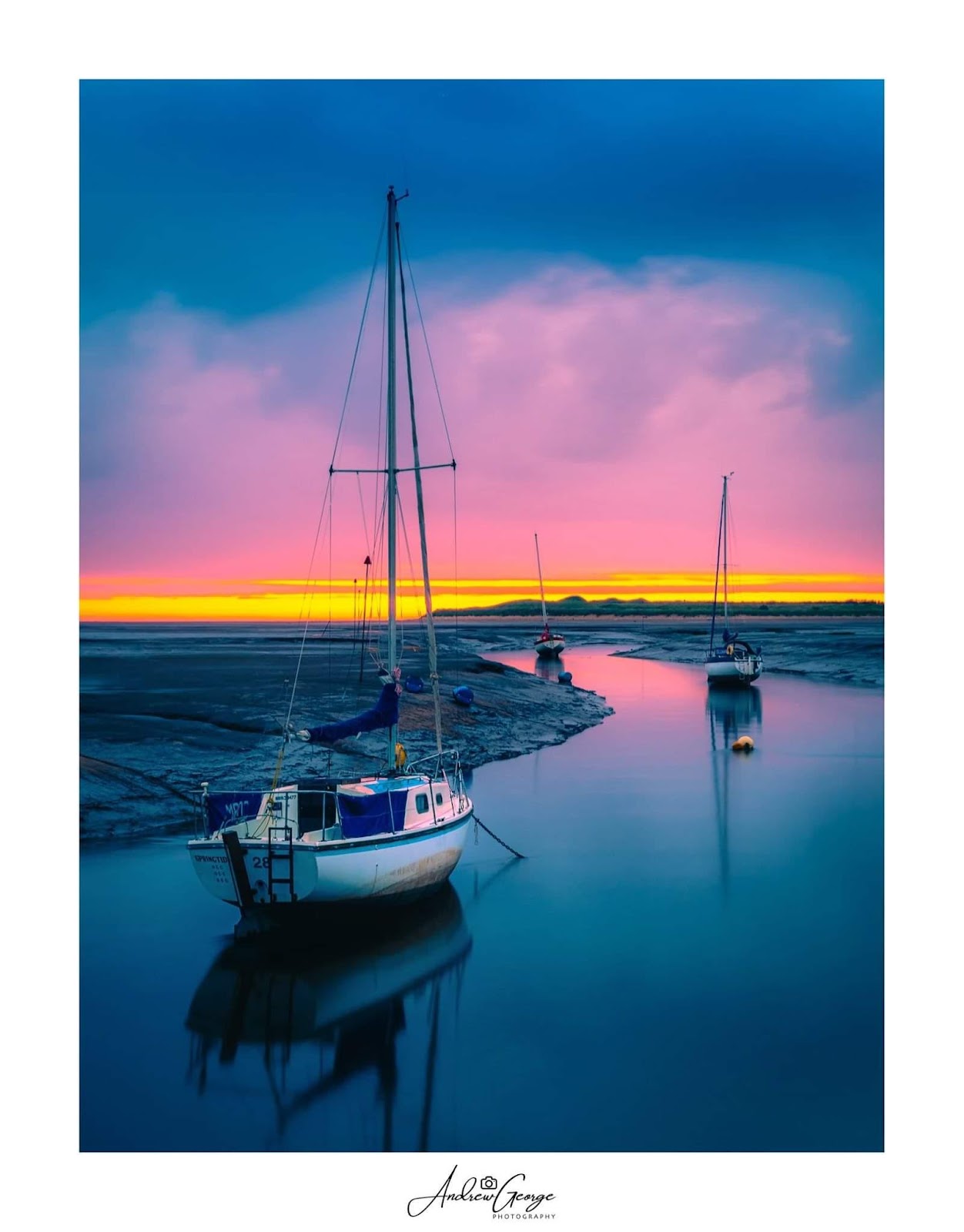 This is a great place to visit for photography and I’ve only scratched the surface of this location so a third visit is definitely on the cards and next time, hopefully I can make it when the tide is in to capture even better reflections.

I set off on this journey with very little expectations due to the weather conditions but I ended up having one of the most colourful sunsets in terms of light on the landscape I’ve ever experienced. I came away having had a very enjoyable experience all because my desire to take images has brought me here. If I didn’t own a camera I probably wouldn’t have visited this location.

Oh, in case you were wondering, my shoes survived.